Radiation Oncology, or Radiotherapy, involves the administration of high-energy radiation to treat and manage cancer in different parts of the body. Radiation Therapy can be given in combination with chemotherapy to improve treatment outcomes of many types of cancer, upon the recommendation of the Primary Attending Physician or Oncologist. It also serves to ease symptoms from advanced cancers that have spread to other organs of the body (metastatic cancer).

The Radiation Oncology Section is equipped with two (2) Tomotherapy machines – the first in the Philippines to have a twin system for service. Treatment plans of patients can be saved in both machines to ensure treatment continuity. Tomotherapy is an advanced type of linear accelerator (LINAC) that is used in External Beam Radiotherapy (EBRT) and can deliver precise Image-Guided Radiation Therapy (IGRT) and Intensity Modulated Radiation Therapy (IMRT). It also has an afterloader that delivers high-dose rate brachytherapy treatments.

A form of radiotherapy where a sealed radiation source is placed inside or next to the area that requires treatment for cancer. It is commonly used as an effective treatment for breast, esophageal, cervical, prostate, and skin cancer and can also be used to treat tumors in other body areas.
Involves the use of imaging during radiation therapy to improve precision and accuracy of treatment delivery. Radiation Therapy machines are equipped with imaging technology to allow the doctor to visualize the tumor before and during the treatment. By comparing these images to the reference taken during the pre-radiation simulation, the patient’s position and/or the radiation beams may be adjusted to target the radiation dose to the tumor more precisely.
An advanced mode of high-precision radiotherapy that uses computer-controlled linear accelerators (LINACs) to deliver precise radiation doses to a malignant tumor or specific area(s) within the tumor. IMRT allows the radiation dose to adjust to the three-dimensional shape of the tumor by controlling the intensity of the radiation beam in small multiple volumes.
A type of external radiation therapy that uses special immobilization devices to secure the position of the patient and precisely deliver radiation to a tumor. The total dose of radiation is divided into several smaller doses that are prescribed over one (1) or just a few days of daily treatments. SRT is performed to treat brain tumors and other brain disorders. Examples of SRT are Stereotactic Radiosurgery (SRS) and Stereotactic Body Radiotherapy (SBRT).
A procedure performed to treat tumors in the body with very high doses of radiation usually in just over five (5) or seven (7) sessions using specialized immobilization devices.

A type of non-invasive radiation therapy performed to treat functional abnormalities and small tumors of the brain. It can deliver precision-targeted radiation in fewer high-dose treatments than traditional radiation therapy, which can help preserve healthy tissues.

Chairman of the Department of Radiology:
Jackson U. Dy, MD 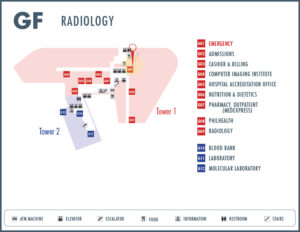