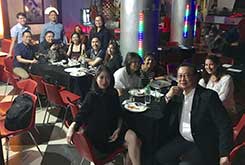 The DZRJ 810 AM “Healthline with MakatiMed” team, led by program producer and host Nicole Jacinto, threw a Thanksgiving party for the doctors who have graced the program since its first episode in November 2016. The party was held on November 17 at RJ Bistro in Dusit Thani Manila. It also marked the show’s first […]